I thank Professor Andrew Strauss for his invitation to this panel, which gives me the opportunity to explore an important emerging field: managing climate change. This subject-matter actually falls under the broad scope of my mandate as UN Independent Expert on the Promotion of a Democratic and Equitable International Order, a huge menu that requires convergence of civil, political, economic, social and cultural rights with a vision to achieve a just international order.

Although I must admit that I only have marginal knowledge of this technical field, I hope that my contribution will be judged from the perspective of applicable legal norms, good governance, best practices, potential solutions in the context of addressing the global challenge of climate change.

As you may know, I assumed my functions as Independent Expert in May 2012 and the mandate was just extended by the Human Rights Council in September 2014, so that I will be in office, Deo volente, until 30 April 2018. I look forward to the opportunity in the coming years to address the issue of geo-engineering from the aspect of its potential positive and negative impacts on the international order, bearing in mind inter alia the work of the UN Environmental Programme and of my colleagues John Know, Special Rapporteur on the Environment and Baskit Tuncak, Special Rapporteur on management and disposal of hazardous substances.

If you read Human Rights Council Resolution 18/6, you will see that mine is a hybrid mandate entailing a synthesis of all rights, as envisaged in the Universal Declaration of Human Rights and unfortunately separated in the two Human Rights Covenants. This separation has impacted negatively on the perception of the interdependence and interrelatedness of al l human rights, including the right to live in a clean environment, to live in peace, to have a homeland. My mandate is so broad, that geo-engineering measures also fall within it, because of its potential impacts on international order. Hence this panel is for me a valuable learning experience. 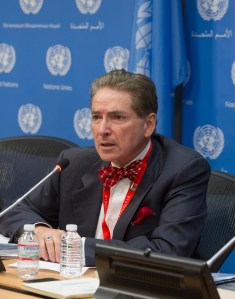 Geo-engineering can be seen from the positive side, when we look at measures to reduce emission of greenhouse gases, reforestation projects, large-scale irrigation, enhancing vegetation, filling swamps and wetlands to combat the spread of malaria and other diseases, contributing to the clean-up of polluted rivers, lakes and oceans, and advancing the conservation of biodiversity and the marine environment.

Relevant hard law and soft law
In this context, existing international agreements should be implemented in a mutually reinforcing, coordinated manner, including the Framework Convention on Climate Change, the Biodiversity Convention, the Convention to Combat Desertification, the United Nations Convention on the Law of the Sea, the Geneva Red Cross Conventions and Protocols and the Statute of the ICC.

Human rights convention are also of relevance, particularly the International Covenant on Civil and Political Rights and the International Covenant on Economic Social and Cultural Rights, which guarantee the rights to health, food and water and impose obligations on States parties to marshal their budgets in a way to promote and not to diminish the enjoyment of these rights.

Positive and Negative potential
Personally, I hail science and innovation and believe that geo-engineering has the potential to improve the environment – but, of course, it can also have dire consequences. Therefore research and implementation must exercise due diligence to minimize the risks.

An obvious danger is the no-longer science-fiction scenario of deforestation and desertification. Indeed, environmental manipulation has resulted in notorious catastrophes, including the drying up of Aral Sea in Kazakhstan-Uzbekistan. Of course, this negative impact was not intended, but a degree of recklessness was involved, as was also the case with the Chernobyl catastrophe in 1986, and the Fukushima meltdown, having built the power station in an area at high risk of earthquakes and tsunamis.

As a human rights lawyer, I am particularly interested in strengthening the rule of law, but I am aware that the promotion and protection of all human rights entails a balancing act, because there are always competing rights and interests. There is nothing wrong in industry’s profit motivation, but this must be tempered by environmental responsibility and the necessary impact assessments.

International hard law already prohibits environmental manipulation as a weapon of war. This is already laid down in the Geneva Red Cross Conventions and Protocols and in the Statute of the International Criminal Court. Surely the hostile alteration of the environment and weather patters constitutes war crimes subject to international criminal prosecution.

The 1996 Advisory Opinion of the International Court of Justice on the Use of Nuclear Weapons makes it clear that a first strike would be contrary to international law. This follows from the Geneva Conventions which establish two principles of legality in armed conflict – the principle of distinction between civilian and military objectives (the prohibition of indiscriminate weapons that cannot differentiate), and the principle of proportionality.

But, of course, nuclear weapons pose a much greater danger than just their use in armed conflict. On 26 September 2014 the UN celebrated the International Day for Total Nuclear Disarmament. And today, 24 October, disarmament week starts, together with the Global Campaign on Military Spending, launched by the International Peace Bureau. Mikhail Gorbachev, Helmut Schmidt and countless other statesmen have highlighted the huge danger to humanity that hangs like the sword of Damocles over our heads: the danger of a computer or technical glitch that will unleash Armageddon. I elaborate on this subject in my 2014 report to the Human Rights Council A/HRC/27/51.
Besides the danger of a global winter and the massive loss of human and animal life, the continued production and stockpiling of nuclear weapons entails a panoply of pollution risks, including through the use of tactical radioactive weapons like depleted uranium weapons, and as a consequence of atmospheric and underground testing – that in the past polluted and condemned for thousands of years large areas of land as well as islands, atolls and the surrounding seas – which are, after all, the common heritage of mankind.

The 1976 Convention on the prohibition of hostile use of environmental modification, which entered into force on 5 October 1978, strengthens the general prohibition that must be seen as deriving from the general principles of law mentioned by the Statute of the ICJ in its article 38(1). National and international jurisprudence have also strengthened this prohibition.

Solar geo-engineering
I would now like to switch to a fourth dimension – solar geo-engineering. Would it necessarily be a Brave New World as imagined by Aldous Huxley in 1932? It should like a magician’s trick to devise ways how to manipulate the earth’s temperature without altering the atmospheric concentration of greenhouse gases. “Solar radiation management” aims at making the earth more reflective and thereby cooling it – SRM the call it. Another related geo-engineering technique is “direct air capture” or the removal of carbon dioxide from the atmosphere.

Huge issues of democratic governance arise. In a direct democracy like Switzerland even banal decisions like building a bridge or a tunnel are subject not only to polling but also to national or regional referenda. A fortiori, the decision whether or not to implement SRM would require consultation with the general public and would have to be approved by referendum, nor merely by executive or parliamentary decision, which would be devoid of legitimacy without popular consent. Would a referendum on SRM result on a positive or negative decision by the public? This depends, of course, on the level of information available and the pro-activeness of Government in facilitating a general understanding of the issues and of the risks involved. 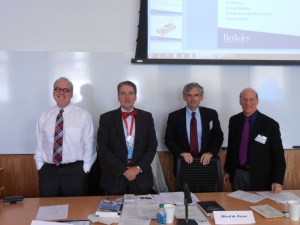 In countries that do not have “direct democracy”, decisions are frequently taken without proper consultation. If the executive were to decide on his own, are there any checks and balances? What would the legislative and the judiciary do? And in modern representative democracies, would Parliaments pass the necessary legislation, e.g. to define the allowed level of risk, to require environmental impact assessments, etc.? Would parliaments pro-actively inform and consult with their constituents? If Parliaments were to decide such important policies without informing the people – or even knowingly against the will of the people – could that be considered at all compatible with the country’s constitution and with a general consensus on a democratic order? Surely not – but that does not mean that it would not happen. European Parliamentarians adopted the Treaty of Lisbon without putting it to popular vote, precisely because all polls indicated that a majority of citizens in the UK, France, Belgium, Germany etc. were against the treaty. And in the only two countries where referenda on adherence to a draft European Constitution had been conducted – it was defeated by popular vote. Judging by this example, it is entirely possible that governments could adopt SRM over the heads of the electorate – and it would be for the constitutional courts of those countries to challenge the constitutionality of measures adopted undemocratically.

Then there is an issue of the international democratic order. What if only ten powerful states want to impose solar geo-engineering and 183 states are against it? Can a collating of willing States impose their will on other States? This raises huge issues of interference in the affairs of sovereign states. Even the UN would be prohibited from such interference, pursuant to article 2(7) of the UN Charter.

There are issues of both civil and criminal liability – and national case law provides abundant precedent of tort liability. This brings me to the relatively new concepts of “Ecocide”, “Geocide” and Earth Law. Some observers like Polly Higgins advocate strict or absolute liability without any need to establish “intent” or “mens rea” – as is the case with genocide under the 1948 Genocide convention. So-called “collateral damage” of geo-engineering cannot be excused or ignored simply because there was no intent to damage. Here would like a major breach of the international duty of care, a minimum threshold of responsibility to protect – or R2P for the environment. 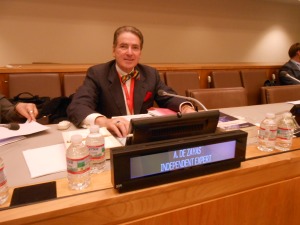 Yet another dimension is the new nanotechnology frontier. Could Nano be sued to manipulate the environment? Nano is probably already being tested in many such ways, but what level of transparency and accountability exists?

Maybe in this brave new world context the United Nations General Assembly should formulate legal questions and refer them to the International Court of Justice for an Advisory Opinion on the legality of geo-engineering and the consequences of damage to the environment with a definition of due diligence, erga omnes obligations of all States , the rights of third States, reparations and restitutio in integrum.

Unilateral geo-engineering might be opposed by many States who could impose trade sanctions or even threaten military action against States that intend to launch geo-engineering measures without consulting them. Geo-engineering governance is therefore necessary.

Some observers have been calling for the Establishment of a World Court on Human Rights that would have competence for the protection of the environment. Such is part of Professor Kirk Boyd’s 2048 Project and its successor the Global Bill of Rights Movement.

Some observers have also suggested the establishment of an International Court for the Environment.

The bottom line is that we hold the Earth in Trust for future generations and this entails an erga omnes responsibility to protect and an obligation to restorative justice.